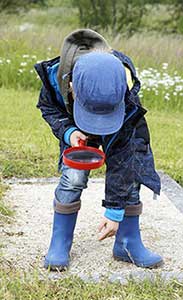 Mystery books for kids hook young readers from the get-go. What kid doesn’t love invisible ink, tapping out codes, and deducing their way to snaring a villain? Sleuthing makes kids feel grown up. Children are trying to figure out their own world, and will identify with a strong character who’s successfully figuring out theirs. A detective is a hero, almost a superhero, but without superpowers or magic, thus kids can imagine really attaining detective status. Mysteries are a natural match for curious youngsters.

The major mystery writer awards have not ignored the books for young readers market. The Edgar Awards, named after Edgar Allen Poe, issues awards in different categories each year, including Best Juvenile Mystery Fiction. In addition to that is the Young Adult Edgar Award. Young adult books don’t shy away from mayhem and murder, whereas with picture book mysteries, there might be a plot about missing cookies.

Another mystery writing award is the Agatha award, named, of course, after Agatha Christie. This award goes to “cozy” mysteries that don’t have sex or violence, making them a natural fit for books for youngsters. Unlike the Edgar, the Agatha doesn’t have a different category for Young Adult, instead having just one category for Best Children’s/Young Adult Mystery. This is more doable because of the relative wholesomeness of the nominees.

The classic mystery books for kids, of course, are the Nancy Drew and Hardy Boys series. But contemporary authors continue to create unique and gripping tales of intrigue.

The Invention of Hugo Cabret, by Brian Selznick, won the Caldecott for illustration, but the writing is equally strong. The remarkable approach to storytelling puts the book in a class by itself. Utilizing text, filmic techniques, and detailed charcoal graphic novel-style illustrations, the book leads the reader into a rich world of a poor boy in 1930s Paris who lives in a wall and is obsessed with finding the secrets of an automaton. It has been made into a movie, Hugo, directed by Martin Scorcese. It’s heavily illustrated but not a traditional picture book and it’s not aimed at very young kids. If you’re looking for well-imagined mystery books for fourth-graders and up, this is a good pick, and one adults would also enjoy for its artistry. The reading level is listed as for ages 9-12. 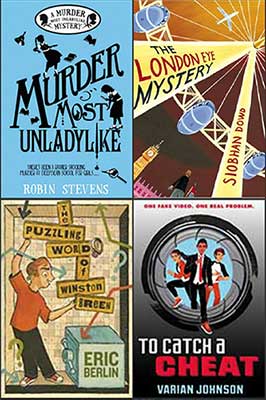 Here are some more winners in the world of contemporary chapter book mysteries. Robin Stevens’ Wells and Wong series is named for its characters and, Daisy Wells, a proper British girl, and Hazel Wong, a nervous girl who’s just arrived from Hong Kong. Being for the upper end of the chapter book age, it’s got killing. It’s set in 1930s London and has loads of wit, humor, and intrigue. Murder Most Unladylike is the first book in the series.

The London Eye Mystery, by Siobhan Dowd, features a brother and sister pair forced to turn sleuth when their cousin, Salim, mysteriously disappears on the London Eye, a large Ferris wheel. Ted, who has Asperger’s, is the star here and the story is told from his vantage point. He uses his condition to solve the clues in this carefully plotted tale.

The Puzzling World of Winston Wong, the first book of a popular middle-grade series by Eric Berlin, whose other job has been crossword-puzzle writer for The New York Times.  As you can imagine, puzzles are a big part. The main character is a puzzle-loving kids who gets perplexing visits from strangers once he gets a puzzle for his birthday. It’s suspenseful, fun, and kids get a real brain workout.

To Catch a Cheat, by Varian Johnson, is the sequel to The Great Greene Heist, the first in the Jackson Greene series. It features a diverse cast, each character having a unique skill set as well as lots of personality. Not only that, but Jackson, is a charming, athletic middle-grade con artist–not your typical all-good guy. The quick, elegant plotting has been compared to Ocean’s Eleven.

As you can see, contemporary mysteries for this age group are more varied in their characters, have more multicultural characters, even anti-heroes, and characters diagnosed with conditions. 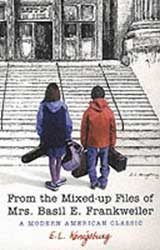 Classic Middle-Grade Mysteries. A classic mystery for middle-grade readers is From the Mixed-up Files of Mrs. Basil E. Frankweiler. It’s one of my favorites and one that I most vividly remember from childhood. In it, two children run away from home and go live at the Metropolitan Museum of Art in New York. The older sister is after elegance and brings her little brother along. They end up getting embroiled in a mystery involving an angel sculpture. But what feels like the best wish fulfillment is them living in the sumptuous museum and having the run of the place. The kids are empowered and important, and take the front seat; Mrs. Frankweiler is not like a parent, but a character of intrigue.

Some people refer to another forever classic, Harriet the Spy, as a mystery, but though it has mystery elements and spying, I wouldn’t characterize it as a mystery book. 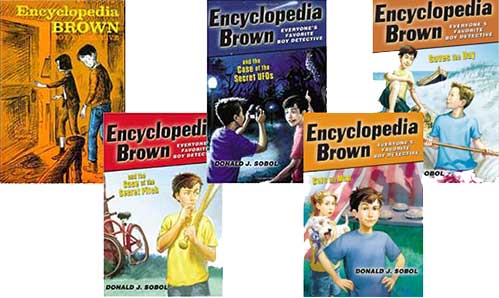 Encyclopedia Brown was a human Wikipedia. He’d solve cases his  police chief dad could not. Like all good children’s books, children live in a world separate from adults, a world in which the kids are in charge and adults are pretty much oblivious. Encyclopedia Brown is good if you’re looking for mystery books for fourth grade and fifth grade, and some younger kids might like it too. Each book is packed with ten stories. See more info on the series at Wikipedia. 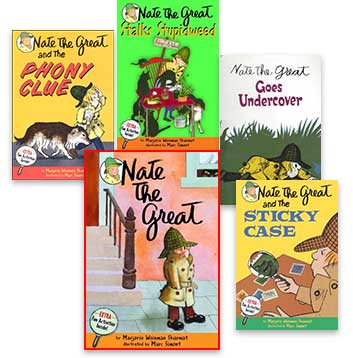 The Nate the Great series takes a tongue-in-cheek, Sherlock Holmes, or maybe Columbo approach. This hilarious series started in 1972. Marc Simont, one of my favorites, was the illustrator. Jody Wheeler later took the reins. I love the classic illustration style.

The droll, dry humor has a dash of absurdity. Nate the Great fits well into the Common Core curriculum for its engaging approach to problem-solving.

Kids reading chapter books are in the “golden age of reading” and can’t get enough, so mystery series for kids ages 7-9 for younger kids just starting chapter books, and 9-12 for older kids, are very popular and can be written and illustrated as franchises by generations of authors and illustrators. 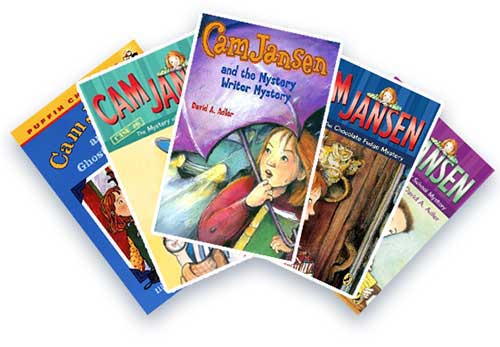 Cam Jansen books are aimed at grades 3 to 7, but could be read out loud to children as young as age 4. The clues are there for the reader to notice and solve. They’re easier than the Encyclopedia Brown clues, which sometime are a bit arcane. The author, David J. Adler, had been a math teacher. He says he thinks of the books as math problems. He thinks of visual clues that the reader can solve.

Cam had a photographic memory, a talent somewhat like Encyclopedia Brown’s encyclopedic knowledge. She might not go after killers, but it takes just as much brains to find out who stole bones from the dinosaur skeleton in the museum. The stories move quickly and are suspenseful–think Chekhov’s chocolate fudge. Kids can have fun “taking pictures” with their eyes the way Cam does. There’s also a picture book series starring Cam, called Young Cam Jansen.

Things to keep in mind when penning sleuths for youths:

Mystery books for kids put adults in the backseat.

A tenet of good writing for children that adults stay in the background. That’s why so many children’s novels star orphans or runaways. It’s easy to see why this is important in a mystery. The child identifies with the detective, the one leading the investigation. They are smarter than both the crooks and other adults around them. Readers will feel good relating to these clever characters, and gain a sense of control by sleuthing out clues.

Kids’ mystery stories aimed at younger children don’t deal in violence. A lot of suspense is built up all the same. We as adult sometimes think we need to be scared or feel that a life is on the line. But you can be on a tense roller coaster ride of a story that’s about something as small as a missing baseball. A missing pet can cause great emotional concern. Mystery books for kids can be counted on to have a happy ending.

Children’s mystery stories are not just about plot. 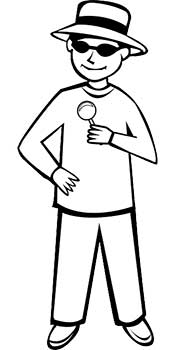 Mysteries by nature revolve around plot, whereas some picture books for very small kids pretty much dispense with plot and put more emphasis on character and story. But even mystery picture books need strong characters and a story with heart.

Character is what drives plot–think of Hercule Poirot and Sherlock Holmes in adult mysteries. Though they get entangled with plot, they are what you come away with. Columbo wasn’t called “A Series of Crimes,” it was called Columbo. And Encyclopedia Brown was the character young readers wanted to be. But in mystery chapter and middle-grade books, the hero does not necessarily undergo an emotional change, as in other children’s fiction. They emerge the same person, ready for the next installment. This doesn’t mean the books lack heart–there is always kindness and emotion. The reader can fret over a missing cat or injustices that get uncovered. Mysteries bring out empathy in the reader, and relief when the caring hero saves the day.

Cam Jansen’s photographic memory and Encyclopedia Brown’s amazing memory for facts are quirks that make them special and drive the story. Their powers of observation inspire kids to pay attention to what’s around them to see what little-noticed things might reveal.

Modern life with its complications is a mystery in itself–how did everything change so much because of the Internet? Why is it when we call the phone company, we talk to someone in India? But it’s all more fodder for authors to come up with ever more clever, fun, and gripping mystery tales for kids.

here is my bio